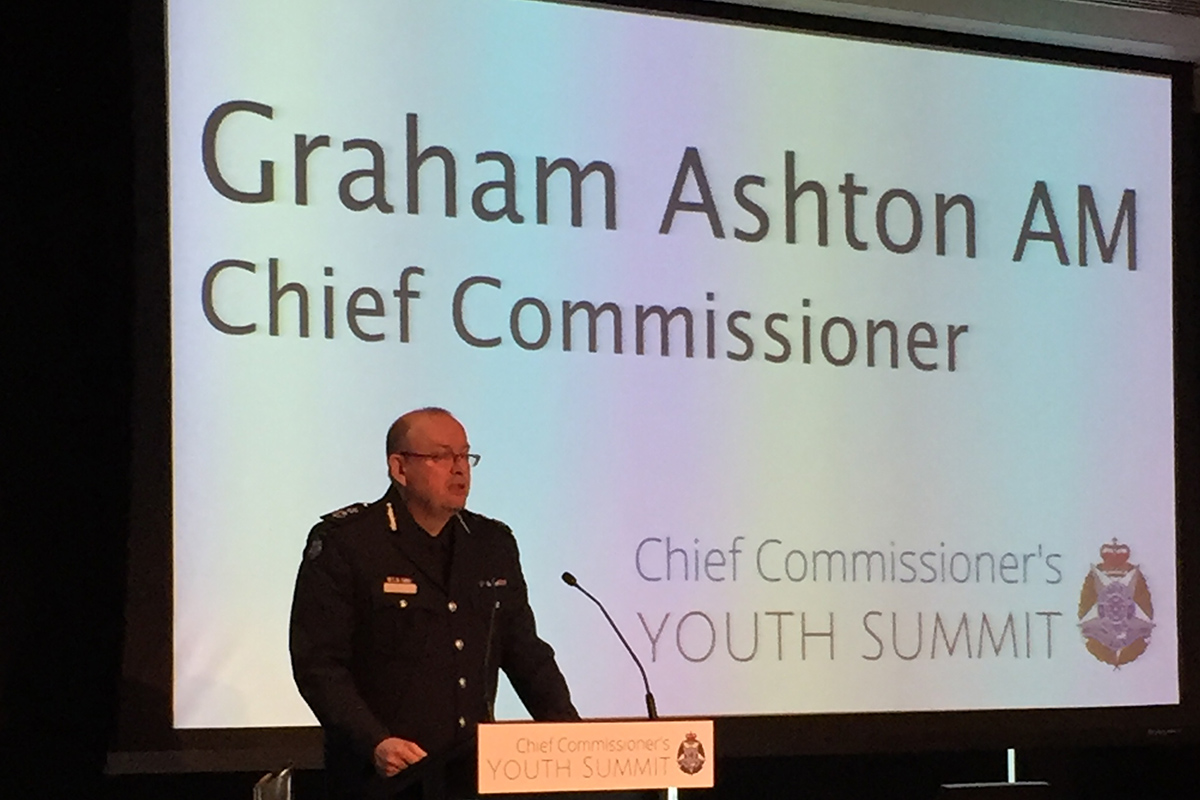 ‘Now is the time for action’

Increasingly concerned about escalating violent and serious offending by a small group of young people, Victoria Police Chief Commissioner Graham Ashton recently convened a Youth Summit. Here is what he told the summit, which was attended by Independent Schools Victoria.

Late last year I began thinking about bringing people together to talk about some of the issues facing young Victorians.

I wanted to hear what young people thought about their vulnerability and understand what drives their involvement in serious crime, as victims or offenders.

We recently held a Youth Voices forum to hear directly from young Victorians.

I am grateful to those young people, especially the ones here in the room today, for being so open. 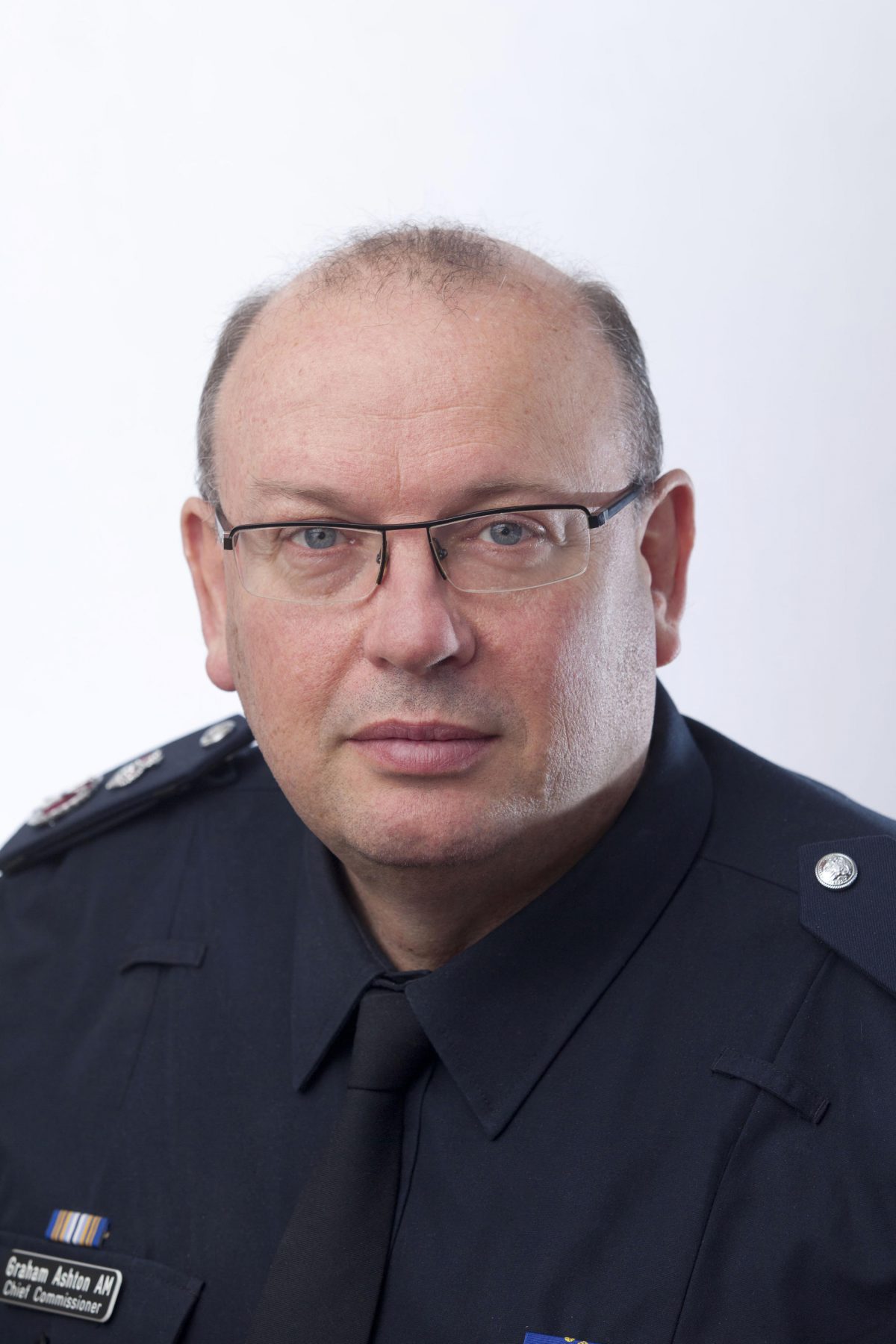 I am going to return to some of the issues they raised shortly, but first I want to expand on why I called this summit.

As you know, here in Victoria our crime rates have been trending up for a few years.

However, this is not because more young people are offending.

Like many jurisdictions in Australia and overseas, the number of young Victorians committing crime has been trending downward.

This is our good news story, but there is something going on beneath this positive trend that increasingly concerns me.

It is the smaller group of younger Victorians who are rapidly escalating into serious and violent offending.

I first started hearing about this from our investigators.

They were seeing groups of young people, mostly boys, involved in multiple crimes  – burglaries, thefts, robberies – and an increasing use of force against any victims involved.

Some of these young people identify as members of known gangs, however many now move between more loosely organised groups for the purpose of offending.

This trend has led us to start thinking more broadly of this as a phenomenon of ‘networked offending’ amongst young people.

The emerging trends that were concerning me late last year are now starting to show up in the policing crime data.

The most recent crime statistics have shown major increases in car-jackings, and home invasions, often accompanied by violent assaults.

And a significant number of the people committing these crimes are under 18.

Over recent weeks you have seen instances of this offending reported in the media.

The car-jackings have a number of distinctive methods, including offenders deliberately running into the rear of vehicles and then stealing the car when the driver gets out to exchange contact details.

Weapons are being used and sometimes, despite the driver being compliant with demands, they are assaulted.

The scenario is similar for home invasions which have occurred across metropolitan Melbourne and are now reaching into regional areas.

These offences are targeted towards stealing new, high-powered cars, which are then used for joy-riding and further offending, mostly involving speed, dangerous driving and violence.

There has been some suggestion that our current focus on young people is alarmist. That they have always been overrepresented as offenders and that what we are seeing now is part of the normal cycle of crime.

I have been testing this notion of a changing landscape with colleagues who have long careers working with young people, both inside and outside Victoria Police.

Many Victorians were rightly concerned about the affray that happened in the CBD during Moomba in March.

What did this mean for Melbourne – a city that prides itself on being safe and welcoming?

We are not used to this kind of mob behaviour on our streets.

This incident emerged with little warning and it flared quickly.

It raised important questions about what drew these young people together and why their behaviour accelerated like it did.

And in particular, whether social media played a part.

We have been speculating about how the online world and other technologies are affecting young people’s involvement in crime, but we’re far from having a holistic understanding.

Certainly technology has made cars and other valuables harder to steal.

This has led to offenders using increasing threats and violence to get car keys or passwords to mobile phones.

We know social media is facilitating young people’s shift to operating in more fluid networks that come together to offend.

The online world is the ultimate connector.

This connection is especially appealing for vulnerable young people who struggle to find identity or purpose, who feel disconnected from their family or community, or who don’t ‘fit in’ to their immediate peer group.

One young man told us that media portrayals can fuel discrimination and aggression.  He said:  ‘When you are shunned by the community, the media and your school, it pushes you into a group that shares your values…there is a feeling that you do not have a place in mainstream community.’

However for other ‘at risk’ young people, these online networks will form a massive extension to the best known risk factor for youth offending – a peer group already involved in crime.

So we remain with the question of why, here in Victoria, we are seeing some young people rapidly escalating into serious and violent crime.

And why this is occurring against a background of fewer young people offending.

Some experts are speculating that youth crime rates are falling, in part, because more young people are heavily engaged in online gaming and social networking which is diverting them away from offending.

But an explanation for what is driving some young people to rapidly escalate into violence is less clear.

We know ice has ‘raised the bar’ for violence.

Amongst other things we have seen the tragic consequences of young people with no history of aggression committing serious violent offences under its influence.

And young people who don’t use ice, told us they feel compelled to carry weapons for protection from the threat of violence from ice-affected people.

It’s far too easy for us to get caught up in young people’s offending, but the reality is children are the group in our community most vulnerable to abuse, neglect and exploitation.

The truth is we don’t know how many children and young people are victims.

Most of these crimes are hidden behind closed doors, not out on our streets where others can see them.

We suspect the reports we do receive are the proverbial ‘tip of the iceberg’ – vastly under-representing the breadth of suffering experienced by our most vulnerable young Victorians.

From the reports we do get, we know most offences committed against girls are sexual or violent.

Boys too, experience violence, some of it sexual.

This offending against children is a tragedy.

Its traumatic legacy for these young people moving into adulthood is profound.

It plays out in mental illness, substance misuse, anger and sometimes as criminal behaviour.

As we speak today about young people and crime, it is the protection of these vulnerable young Victorians that will remain foremost in my mind.

This leads me back to what we heard [at the Youth Voices forum], and from other young people.

What they told us about their lives is compelling and disturbing.

Many talked of being overwhelmed by stress.

For those in school it was the pressure to finish with the marks they needed to get into further education and maximise their chances of getting a job.

For those not in school, we heard about the stress of independent living.

This is a critical issue – the role of families, and how we support children who lack caring and supportive adults in their lives.

Everyone needs someone to disappoint – to know that someone cares and takes an interest in their wellbeing.

Not surprisingly, employment was a major issue for most.

They told us how hard it was to cope financially and emotionally without the support of immediate or extended family.

One young man told us that it was less stressful to sell drugs than it is to negotiate Centrelink.

Another described how hard it was to resist re-offending saying: ‘Your past follows you around – you are not allowed to forget your mistakes.  So you turn back to crime because you feel so hopeless.’

One young Muslim-Australian spoke about the compounding impact of racism:

‘If you’re black and Muslim, you just feel there are no opportunities and you can’t fulfil your potential…If you apply for jobs and keep getting knocked back, then you give up… What is the point of dreaming of getting a good job one day if you can’t even get a job at the local supermarket or newsagents?’

We heard that services for young people were disconnected and there were limited opportunities for vocational education and apprenticeships.

Whilst the unemployment rate is currently just below 6%, our young people are finding it challenging to enter the labour market.

Around a third of young people who want to work are either unemployed or not getting as much work as they need.

Education and The Dangers of Exclusion

These young people understood the criticality of education.

Even those who had disengaged themselves saw school as indispensable in steering people away from offending.

One young man told us that expulsion from school should be banned – a view echoed by many others.

They told us that being expelled from school set them up to fail.

But what can be done about the behaviours that lead these young people to be expelled from school?

Interestingly many showed great insight into their problem behaviours.

They spoke of frustration and anger.  Of not being understood.  Of being underestimated and treated like they were stupid.

Unable to manage themselves, and without supportive adults in their lives, they looked to school for guardianship.

The failure to attain the education needed to get a job is a core experience of a growing cohort of young people who talk of feeling ‘locked out’ of the mainstream.

This experience of exclusion from the opportunities afforded to others is, understandably, a source of great anger.

So the question emerges – could the ‘locked out’ experience be driving some of the changes we are observing in young people’s involvement in crime?

As I said earlier, this summit is not about being alarmist.

We know that the majority of our young people are doing well, and that overall youth crime is decreasing.

But there is a cohort of young people whose lives are being irretrievably set off course by early involvement in serious and violent crime.

We want to stop this trend.

Like family violence, this is something that requires a holistic response.

It is an issue for all of us.

We need to have this conversation, gain a broader understanding, about what we are seeing.

I don’t pretend to have the answers.  And I don’t want to pre-empt the discussions and outcomes of today.

But it’s only by trying to understand what is driving these trends, that we can start to think about how to intervene.

Now is the time for action.

Because I do have a sense that if we don’t act now, we may miss an important opportunity – an opportunity to enhance the lives of vulnerable young people now and into the future. 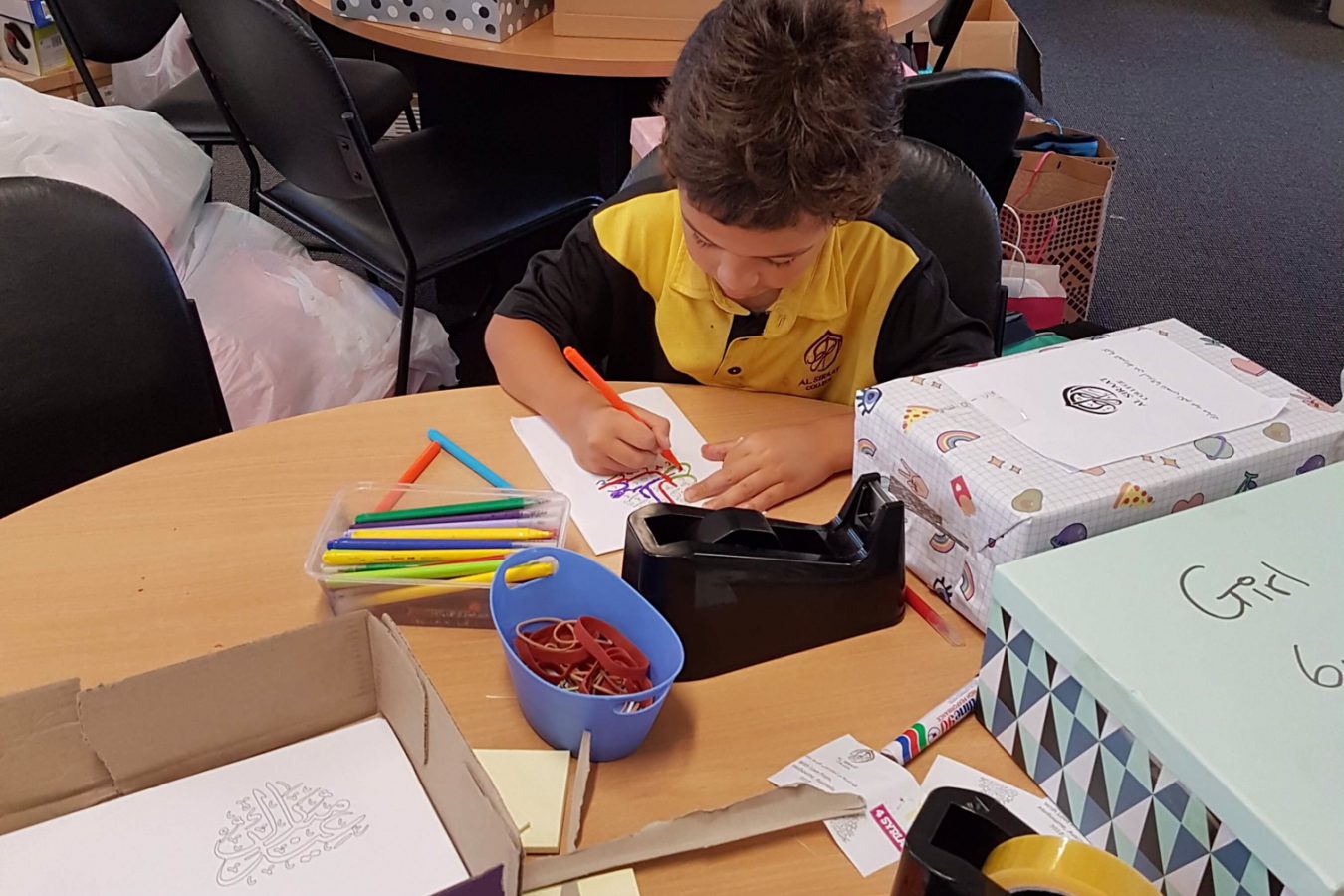 Students at Al Siraat College in Epping have embraced the Shoebox4Syria campaign, preparing thousands of gifts for Syrian children in refugee camps. Read the latest in our series celebrating the community work of Independent schools.

‘The most wonderful gift’

Earlier this year, we featured the work of Fiona Luth's Fiji Book Drive. She reports back on the remarkable impact the project is having.

Students at Al Siraat College in Epping have embraced the Shoebox4Syria campaign, preparing thousands of gifts for Syrian children in refugee camps. Read the latest in our series celebrating the community work of Independent schools.

‘The most wonderful gift’

Earlier this year, we featured the work of Fiona Luth's Fiji Book Drive. She reports back on the remarkable impact the project is having.